Abhishek Singh’s work is acclaimed around the world for it’s unique style and storytelling. His critically acclaimed Krishna – A Journey Within for Image comics is the first graphic novel by an Indian origin writer/artist to be published in the American comic book history. Recently, for Wevr, L.A. he Art Director first-of-it’s-kind virtual reality film for Deepak Chopra. He is currently working on his new graphic novel and film project.

Spanning fine art exhibitions, comic books, animation and VR films, his work has been exhibited in prestigious places like LACMA, Asia Society, Vermont Museum, and Burning Man. He is known for his earlier comic book works including visual artist / co-creator for Deepak Chopra and Shekhar Kapur’s Ramayana 3392 A.D, published by Virgin Comics and visual artist for Kali and Shiva, India Authentic Series. Cumulatively his comics have sold over half a million copies and have been translated in Italian, Spanish, French, and English receiving critical acclaim for their artistic interpretation.

Abhishek’s art exists at the intersection of ancient and modern, science and spirituality, pop culture and the sacred divine.

Sourcing from an innate sense of kalpana (imagination) and arduous sadhana (spiritual discipline) Abhishek’s work is a bridge between the drawn temporal and the sacred meta physical. The fantastic drapes a primordial story-teller through the wide range of mediums he explores; oil & acrylic paintings, ink & brush drawings, virtual & animation pieces, graphic novels, comics and fine art books. His stories transport the experiencer to other-worldly realms of the supreme ranging between original futuristic fables and re-imaginations of the mythological stories of India.

Born in Gwalior, India Abhishek’s upbringing was showered with India’s ancient Myths and folk tales. As a child, he began creating his own on the walls of his family home with simple white chalk taken from grade school. After studying Animation Film Design at India’s National Institute of Design, he set out to travel throughout his own country to experience and absorb the deep, rich stories that reticulate India. To prepare for his work he studies the relationship between inner and outer worlds, exploring the Vedic texts, quantum mechanics, botany, neuroscience, his love for Italian Renaissance art, and many 20th Century scientists and mythologists.

His paintings, drawings and digital works have been exhibited a wide array of disparate exhibits and venues including; Heroes and Villains: the Battle for Good in India’s Comics at the Los Angeles County Museum of Art (LACMA); Transcendent Deities of India: The Everyday Occurrence of the Divine at the Asia Society Center in Houston, Texas; Dhyana Roopa at the Academy of Fine Arts and Literature in Delhi, India sponsored by the Nirula Family Art Trust, and at the visionary Fractal Gallery at Burning Man sponsored by the Black Rock Arts Foundation.

Abhishek’s graphic novel and comic book works include KRISHNA – A Journey Within, published by Image Comics. He was the visual artist / co-creator for Deepak Chopra and Shekhar Kapur’s Ramayana 3392 A.D, published by Virgin Comics and visual artist for Kali and Shiva, India Authentic Series. Cumulatively his comics have sold over half a million copies, have been translated in Italian, Spanish, French, and English receiving critical acclaim for their artistic interpretation.

Abhishek currently lives between his studios in Brooklyn, New York and Mumbai. Whenever possible he retreats for a meditation trek in the Himalayas.

There’s something charming embedded in the intricate design of this universe which keeps corresponding with us, imbuing in us a sense of wonder, making us collect thoughts both abandoned and celebrated, making us tell stories.

The eras of heart and soul are what get represented in our drawn motives or in the songs we sing. A deeper connection permeates all beings in this shared experience of life. To look for hope in desolate dreams, an understanding to heal ourself – that is what I seek when I create.

My work in it’s simplest intentions is a testament to the mystery of life, a journey to the very nucleus of imagination. 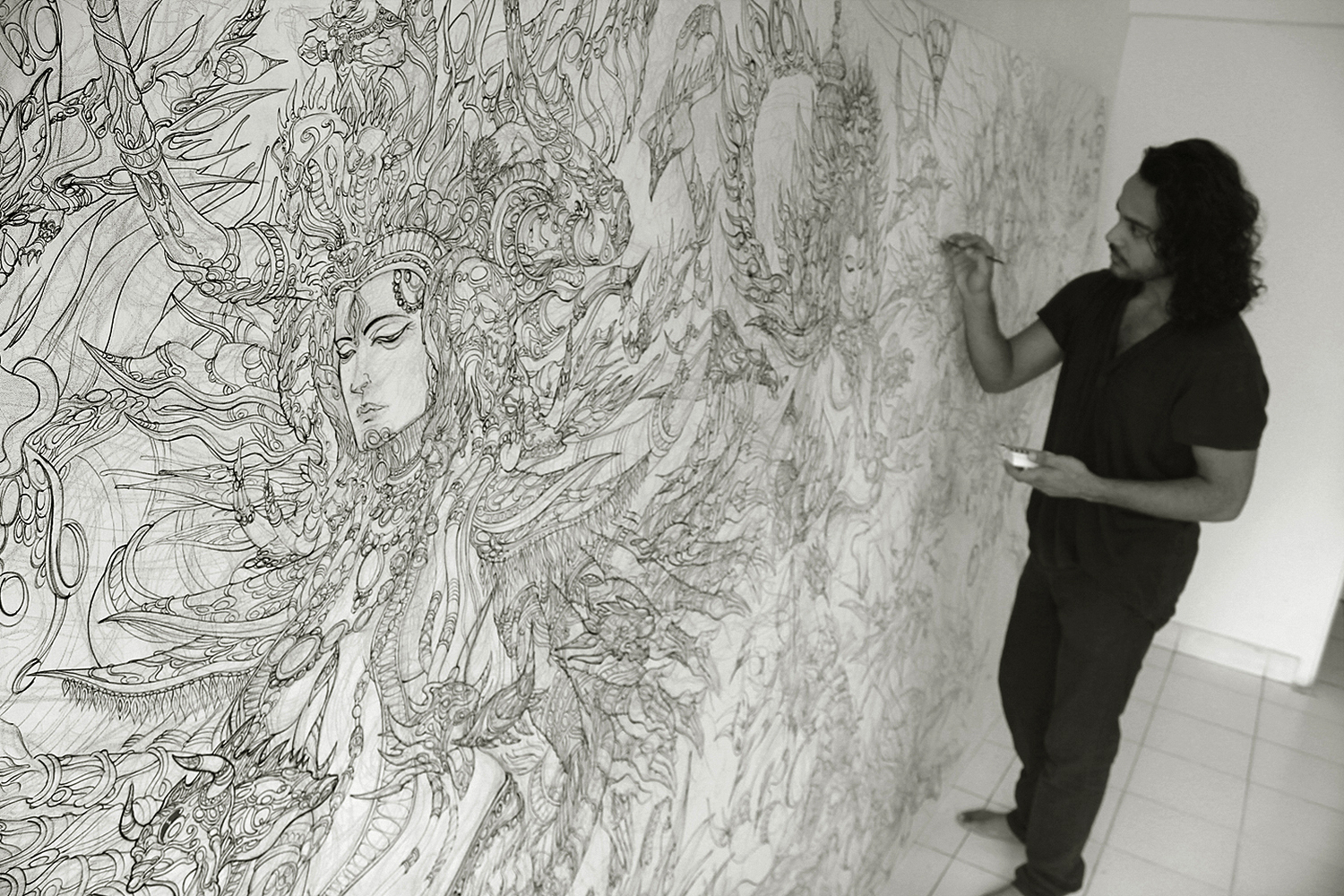